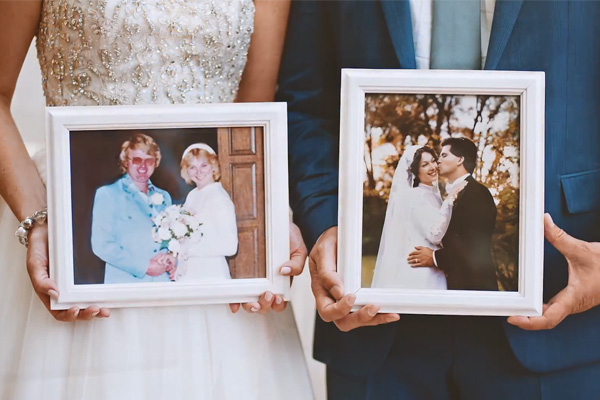 From loss comes hope as Laura and Mark Vieira honour their late parents at their wedding.

“We feel like everyone has been impacted by cancer in one way or another and our parents were such giving people. It was important for us to do something in honour of our parents.”
-- Mark Vieira

It was a beautiful summer day on July 2, 2016 when Laura and Mark Vieira said ‘I do’ in front of family, friends and their two-year-old daughter, Isla.

“When I saw Laura walking down the aisle, it was just one of the best moments of my life. It was just a perfect day,” said Mark.

Weddings are a time to celebrate love with those closest to you, but for Laura and Mark two very important people were missing.

Shortly before their engagement, Laura’s father, Dan, was diagnosed with kidney cancer at the age of 66.

“He was a really, really good friend of mine. My dad was full of life and energy, and had a bright spirit that you just wanted to be around. My dad was everything to me,” said Laura.

Sadly in February 2015, after two years of battling the disease, her father passed away. Unfortunately, for this couple, it wouldn’t be their only loss that year.

On April 22, 2014, the day Laura and Mark’s daughter Isla was born, Mark’s mother Josie was diagnosed with breast cancer. Josie, who had battled kidney disease 14 years prior, was in remission when doctors delivered her the news.

“During her last year she really cherished every moment and, you know, we had great times together. We still have some amazing videos of her and Isla dancing around the house together,” said Mark.

In October, just eight months after Laura’s father passed, Mark’s mother also lost her battle to cancer at the age of 57.

Although their parents did not live to see their wedding day, Laura and Mark chose to honour them with a donation to Cancer Care at London Health Sciences Centre.

“We feel like everyone has been impacted by cancer in one way or another and our parents were such giving people. It was important for us to do something in honour of our parents,” said Mark.

On their wedding day instead of favours, the Vieiras placed a card at each of their guest’s seats letting them know of the donation that had been made on their behalf.

We knew our money was well spent in that way, and we knew where it was going. We saw firsthand that the hospital always needs more things…to build on what it already is and continue to provide better care and help more people going through that situation,” said Laura.

Laura and Mark recognize that while there is still much to be achieved in research and finding a cure for cancer, they are grateful for the care their parents received. That is why they are encouraging the community their parents called home to give back, so that future patients and families can have more treatment options, and hopefully, better outcomes.