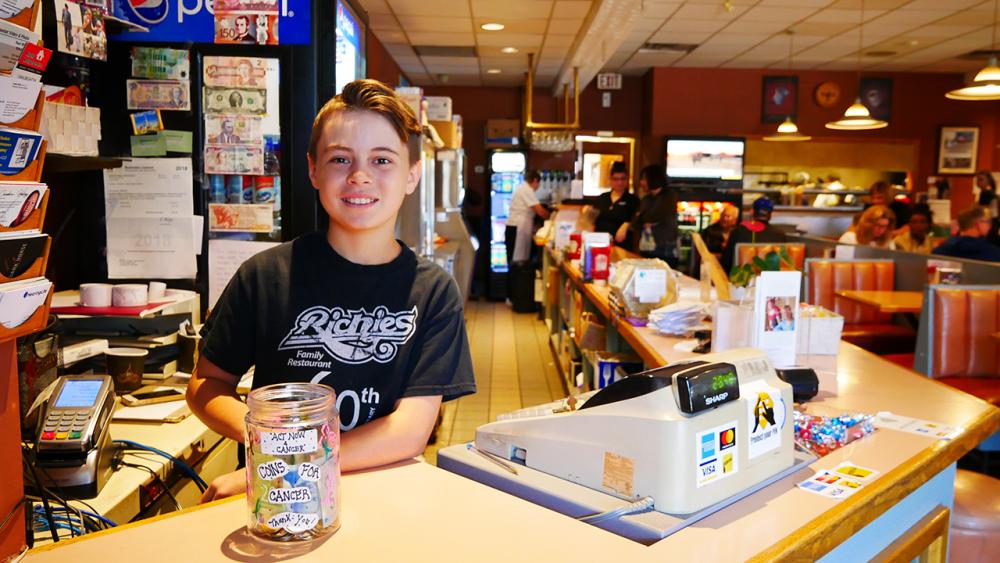 Ashton Lefteris has an ambitious goal to raise money for cancer care.

“They both have been the most fabulous doctors,” Jennifer says. “I feel like they’ve saved my life to this point and I’m just grateful.”

While his mom received treatment, Ashton began working on a school project called Genius Hour – an initiative that allows students to explore their own passion project during classroom time, inspired by Google’s employee initiative.

As a budding doctor-to-be, Ashton began delving into research on how he can help patients like his mom. He stumbled across the Access Cancer Therapies (ACT) Now website – a fund that helps patients at LHSC afford critical treatments not covered by OHIP, which happens to be the very passion project of his mom’s oncologist, Dr. Kylea Potvin.

“The fact that she’s my mom’s oncologist and started this important fund to help people really inspired me, “Ashton says. “Seeing all the struggles people went through, I just wanted to find any way I could help out.”

That’s when he decided to start a fundraiser in support of ACT Now. His mother, Jennifer, wholeheartedly supported his enterprising vision.

“I’ve been through that diagnosis part and the fear and the trauma that comes along with that,” Jennifer says. “To know that there’s something there to help you and not have access to it because you don’t have the funds to do so is unthinkable. So it just clicked with us that we had to help ACT Now. ”

Ashton brought in a coin jar to his workplace, Richie’s Family Restaurant, and encouraged the servers to donate a portion of their tip money to ACT Now. Soon, customers were also donating generously to the jars.

“Then the jar just completely blew up,” Ashton says. “There was so much money going into it.”

Ashton has presented his coin jars to dozens of family restaurants throughout London and has yet to be turned down.

“While he’s giving his presentation to the managers on site, customers are often within earshot,” Jennifer says. “We’ve had a few come up right away and put $20 right in the jar. People are moved when they see young people doing great things.”

Ashton keeps the list of restaurants where his jars can be found updated on his Facebook page. He has already raised more than $2,000 within a few months and is expanding his fundraising efforts, with future plans of book sales, garage sales, neighbourhood walks and other creative endeavours.

“Usually the coffee at my dad’s work is free, but now they’re going to have to pay for it, with all the funds going to my fundraiser,” Ashton says.

His mom couldn’t be more delighted to see her son become such a young advocate for philanthropy.

“I’m really proud of his courage and his determination,” Jennifer says. “I think it has changed him as a person and will change the way he sees things in the future.”

With a short-term goal of $10,000 and $1 million in the long-term, Ashton sees no end to his fundraising efforts.

“Money means research and research means hope that they will someday find a cure. By starting early, there’s a good chance that we can make a big impact towards this disease.”

Donate to Coins for Cancer

Start your own fundraiser