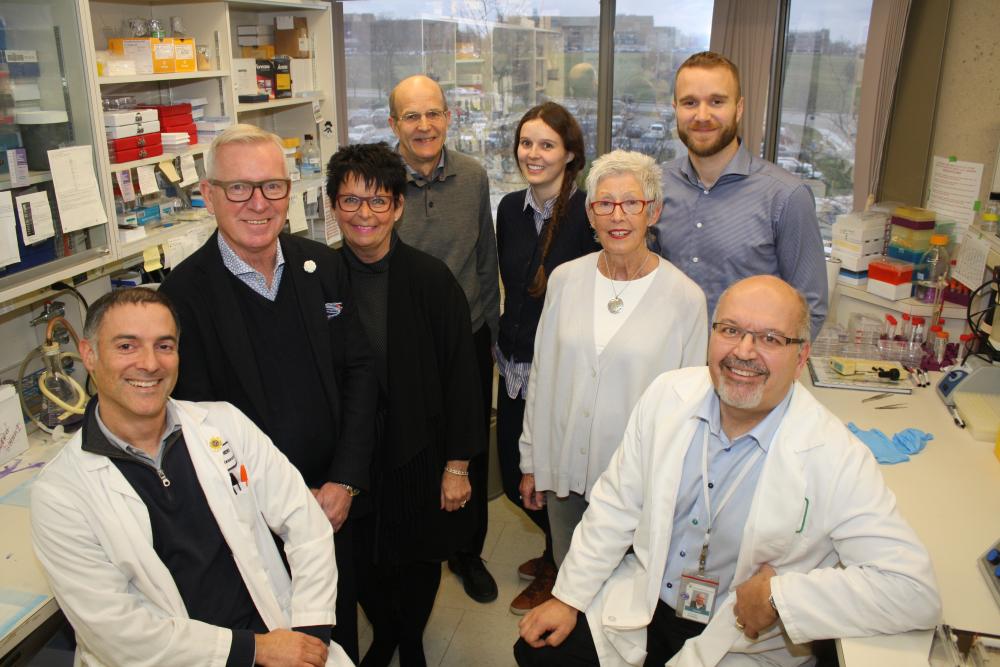 Gary Pooley had made the drive from his home in Waterloo to London Health Sciences Centre many times. A sense of worry and stress would always pervade these drives when his wife Karen was receiving treatment for late-stage ovarian cancer.

However, when he was making the drive last November with his daughter Lisa and son David, he felt a renewed sense of hope – a feeling he hadn’t experienced much since Karen passed away three years prior.

On that particular day, they were driving to meet with the Translational Ovarian Cancer Research Team at London Regional Cancer Program (LRCP) to see a demonstration of a new piece of equipment that could help advance research into ovarian cancer. This novel technology – the IncuCyte Zoom – could save the team crucial time in analyzing thousands of ovarian cancer cells for tumour growth.

For the Pooley family, it was a profound and meaningful meeting. They donated $100,000 toward the equipment, joined by a group of generous community members who had also given $100,000.

“We contributed to the purchase of the IncuCyte System to support invaluable research into ovarian cancer at LRCP,” Gary said. “There may be the cure for ovarian cancer somewhere out there in the future, but realistically, in the shorter term, there’s earlier diagnosis and alternative ways of treating ovarian cancer that I’m hopeful will come out of this program.”

By the time Karen was referred to a specialist in Kitchener who diagnosed her ovarian cancer, the cancer had already spread to other parts of her body, so she couldn’t benefit from the early diagnosis or alternative treatments Gary hopes the research his family is supporting will allow. The team in Kitchener then referred Karen to Dr. Akira Sugimoto, an oncologist at LRCP, for a surgery to remove as much of the tumour as possible.

“When we went for the initial meeting with Dr. Sugimoto, we were both very appreciative of the sensitive but straightforward way he communicated and handled telling us what the prognosis was,” Gary said.

Karen was a former veterinarian with a scientific mind and she appreciated being able to speak with her care team frankly about her treatment.

Karen received a procedure at LRCP – called a debulking surgery – that helped extend her life, but ultimately the cancer had spread beyond treatment and the chemotherapy she received over the next two years in Kitchener was not successful. She died August 2, 2013 at the age of 66.

Karen was a loving mother who gave up her veterinary practice at a young age to care for her family and ensure they received the best education. A lover of nature and animals, Karen also gave her time and money to nature conservation and animal charities and inspired Gary and their kids to make the world a better place.

Among other philanthropic endeavours, they continue to participate in the annual Run for Ovarian Cancer in May. They also keep in touch with the co-leads of the Translational Ovarian Cancer Research Team, Dr. Gabriel DiMattia and Dr. Trevor Shepherd, as the team advances ovarian cancer research with the help of the IncuCyte Zoom and moves one step closer to improving outcomes for women facing this frightening diagnosis.

“We need to raise awareness for ovarian cancer so that we can have more programs like the Translational Ovarian Cancer Research Team. Without the awareness, it’s difficult to raise money specifically for ovarian cancer. We’re committed to helping because the team is doing leading-edge research that we believe will lead to a breakthrough in the battle against this insidious disease."
-- Gary Pooley