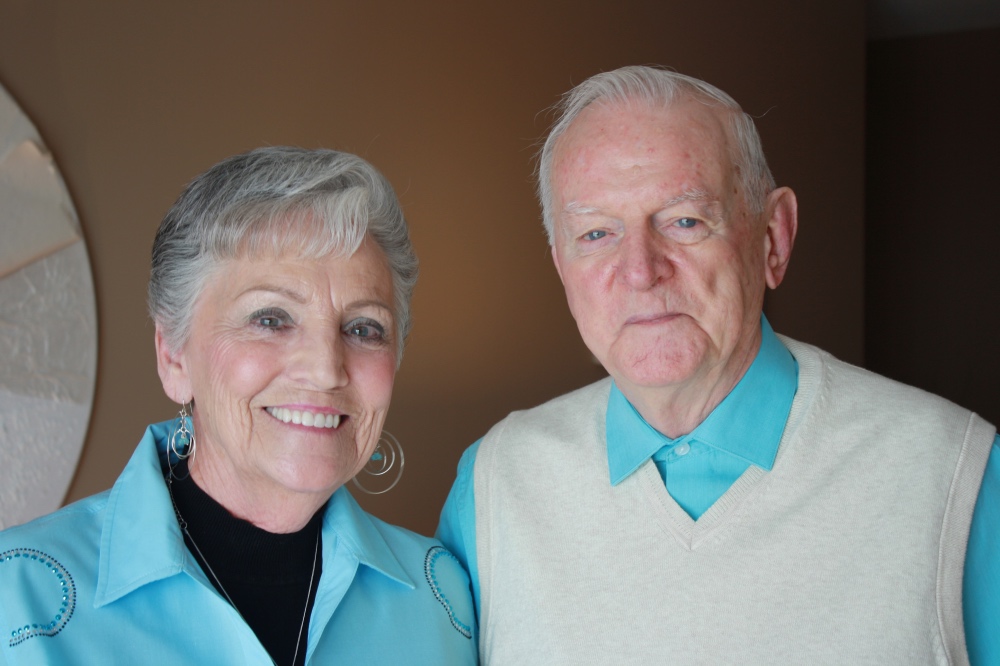 The loss of a child, an unexpected quadruple bypass surgery and a breast cancer diagnosis might be too much for some couples to bear – but not for John and Lorraine Yeoman.
Life is a series of moments - some out of control, some thoughtfully planned out; some seemingly inconsequential, some heart breaking - and it is how you react and respond to those moments that can inspire a community.

The loss of a child before her prime, an unexpected quadruple bypass surgery and a breast cancer diagnosis might be too much for some couples to bear. However, for John and Lorraine Yeoman, they not only managed to get through it with their humour and grace intact, they even pledged to support the future of health care here in London with a Planned Gift.

Years after the loss of their only child in a tragic motorcycle accident - that  John, now 82 years old, describes as "blameless" while showing a photograph of vibrant, teenaged Debbie - John and Lorraine moved to London after his successful career at IBM and hers as an Ontario Division Manager for a Montreal-based manufacturer.

In 2003, John underwent a hernia surgery at London Health Sciences Centre's (LHSC) South Street Hospital. The surgery was successfully performed by Dr. Daryl Gray and was assisted by resident Dr. Muriel Brackstone in what would turn out to be a serendipitous moment for the Yeomans. In late 2010, Lorraine was diagnosed with breast cancer and had her lumpectomy performed by none other than Dr. Brackstone. It was that connection with Dr. Brackstone and Lorraine's experience surviving breast cancer that motivated the Yeomans to leave half their estate to support breast cancer care in London.

For John, the reason behind leaving the other half of their estate to support the next generation of  robotic-assisted heart surgery at LHSC's Cardiac Care Program is just as personal, both to his medical experiences in London and his passion for technology, thanks to his career at IBM.

In June of 2006, John decided to cut a round of golf short because he wasn't feeling 100 per cent. The next morning, John and Lorraine thought he should stop by the Emergency Room, just in case. As it turned out, despite a lack of serious symptoms, John was admitted to LHSC's University Hospital and booked for quadruple bypass surgery - but not before another fortuitous moment.

"One of the tests they do for anybody with a heart complaint is to take a blood test that takes about six hours to complete. At the end of that time, Dr. Sarah Graydon, a Resident Cardiologist from the cardiac unit, came to me and told me she'd seen a blood marker that seemed to indicate that I'd had a heart attack," says John. "It was so minor that it was hard for her to even determine - but she did it. I credit her with saving my life."

"I had four blocked arteries with no visible symptoms and medical records that went back ten years and showed no problems at all," says John. "The care that I was given and all the preparation they put me through was absolutely marvelous. From beginning to end, in all aspects, the care was outstanding and I'm proud to say I became buddies with the porters and nurses who helped take care of me."

While John underwent traditional surgery successfully performed by Dr. Ray Guo, it was partly out of love for technology, partly out of gratefulness to Dr. Guo and partly out of a desire to give the next generation even better surgical options that John decided to support robotic-assisted cardiac surgery. Donors have played a critical role in establishing LHSC as a national leader in minimally invasive robotic surgery and the exclusive training centre for robotic surgery in Canada - and donors like John will help our Hospital reinforce its position as a world-class centre for surgical innovation and research.

"We wanted to do something to support the entire marvelous health care industry here in London. We felt that by directing it specifically towards LHSC's Cardiac Care program and the breast cancer clinic, we are getting the best bang for the buck with our donation," says John.

John and Lorraine consider themselves lucky to have received such outstanding health care in London, but in reality, it is our city and our health care community that is lucky to have them, not just for the generosity and forethought of their Planned Gift, but for the inspiration their positive outlook provides.

"We wanted to do something to support the entire marvelous health care industry here in London.”
-- John and Lorraine Yeoman