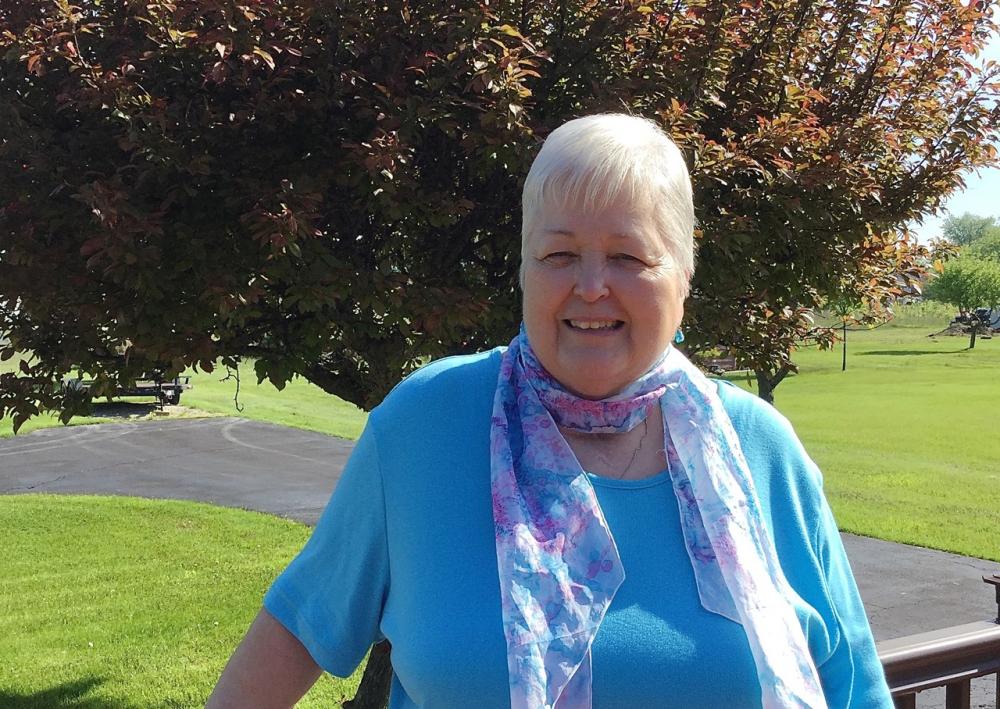 In the past seven years, Lenore Rawlings has been through one life-threatening health scare after the other.

In 2011, she and her husband George pulled over near their home in McGregor, Ontario, when a pickup truck that veered off the road struck them. Lenore suffered a blood clot in her lung, which left her in a coma and clinging to life in intensive care.

Coming close to death several times, doctors in Windsor performed six tracheotomies to open her airway. Lenore tenaciously pulled through each trauma, spending four months in the hospital before being referred to LHSC, where surgeons removed most of the scar tissue from Lenore’s vocal cords and esophagus so she could speak again.

After enduring such trauma, Lenore was incredibly grateful to be moving on with her life when another shock hit. She began experiencing post-menopausal spotting and bleeding. A visit to her gynecologist, followed by biopsies, revealed pre-cancerous cells, which meant her uterus and other reproductive organs, had to be removed.

Her doctors referred her to LHSC for a hysterectomy because she was considered high-risk due to her previous surgeries.  Within a month, she had an appointment with LHSC Ob/Gyn Dr. Robert Di Cecco. Much to Lenore’s relief, Dr. Di Cecco informed her she was a candidate for the less invasive robotic surgery.

She and George arrived in London in May 2017 for her surgery. Given Lenore’s previous traumas, they steeled themselves for any unforeseen complications.

Lenore went in for the surgery at 8 a.m. and, to her amazement, was discharged by 6 p.m. Though she was nervous to be leaving the safety of her care team, Lenore wasn’t in pain and trusted their decision to send her home.

“I can’t complain about the care because Dr. Di Cecco and the nurses and the porters and everyone were just so fantastic,” she said.

The next day, she was delighted to discover she still wasn’t in any pain. She had assumed she’d be bed-ridden, but she felt well enough to go out for dinner the next night with George – turning what she thought would be a painful and fraught time into an unexpected date night.

Aside from experiencing after effects from the anesthetic, Lenore described her recovery as “easy peasy.”

The best was yet to come. Lenore will never forget her follow-up appointment later that month with Dr. Di Cecco.

“As soon as he walked into the room, he said ‘Well, the first thing I’m going to tell you is that you don’t have cancer. We got it out before it set in.’”

Lenore was finally able to go back to enjoying her life – going for walks, cooking, spending quality time with her husband and family, and enjoying plenty of laughs with her new friends in aqua therapy. Her hysterectomy quickly becoming a distant memory thanks to speedy healing of the five tiny incisions.

“When you figure out the savings on the recovery costs, plus just the mental attitude that I could be home instead of having to stay in the hospital, that itself is priceless,” Lenore said.

Lenore now gives back what she can to LHSF and to other charities she and George are passionate about.

“To me, keeping a hospital open with the proper equipment that makes people’s lives better is the most important thing.”