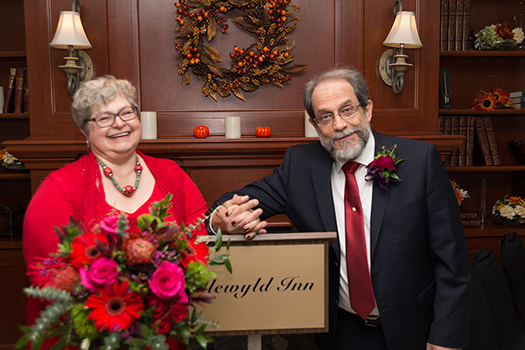 Martie Grof-Iannelli is a loving mother, wife and happily retired Librarian and University Instructor. For twenty-three years, she taught in the Master’s program of Library and Information Science at Western, and later became the Senior Manager of Library and Media Services at Fanshawe.

Martie enjoys editing written works in her spare time and has always dreamed of writing her own novel. Eight years ago, cancer was the furthest thing from her mind; little did she know her life would be uprooted with an unexpected cancer diagnosis. Years later, Martie longs to give back by volunteering her time at LHSC.

After undergoing a routine colonoscopy in 2010, Martie was diagnosed with late stage colon cancer. She hadn’t experienced any symptoms that would have indicated her health was in jeopardy. “I was so surprised to find out I had cancer. It was a real shock,” Martie says.

Seconds after her diagnosis, Martie took control of her cancer journey. She felt that there was no time to waste, and wanted to know from her doctor what had to be done next, “It’s not that I’m a linear thinker, but if you have a major health project – you can’t be the unwilling victim. You have to take control.”

Martie underwent surgery nine days after her diagnosis, and shortly after began her grueling experience with chemotherapy. For six months, she experienced almost every side-effect in the book; she became extremely sensitive to the cold, lost all sense of taste, lost feelings in her hands and feet, and experienced extreme weakness and fatigue.

Throughout her journey with cancer and chemotherapy, Martie’s son, rector and close friends acted as her cheerleading team along the way. Although Martie's husband worked in Toronto, he would drive home daily to be with her; but towards the end of her treatment he was stationed in the high arctic, and was unable to return often.

While her husband was away for work, Martie's friends pitched in by dropping off meals to let her know they cared. Nothing was more important than the support she received from her friends and family, “I’m blessed because I have an extraordinary team behind me,” Martie says. “The true essence of friendship is more alive to me now.”

Martie speaks highly about her personal team and her medical team. She praises the care she received while completing her treatment at LHSC, “The nurses at London Regional Cancer Program are angels, they are absolutely unbelievable,” she says.  “I am so pleased that there are people at the hospital who are compassionate, knowledgeable and mentoring. I just think that is such an extraordinary calling. They are my heroes.”

Martie says she feels grateful for the whole cancer experience, “I know that must sound so bizarre, but I have a better appreciation of the little things,” she explains. “I think it was the best thing that’s ever happened to me.”

Now that Martie has been cancer-free for a few years, she wants to give back to the hospital by volunteering at London Regional Cancer Program (LRCP). “I desperately want to be of service to the hospital, ‘she says. “I would love to be able to speak to cancer patients about the little tricks to make life easier when undergoing treatment and to tell my story.”