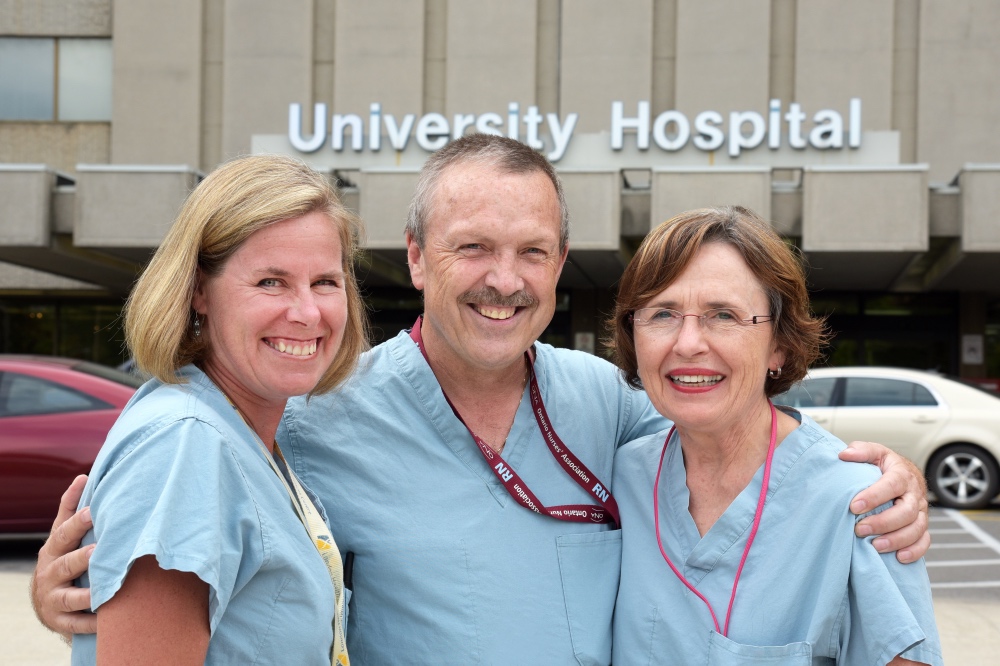 Paul Griffiths was told that his coronary arteries were 90 per cent blocked, and that he was a walking time bomb for a heart attack – and it was his LHSC colleagues who saved his life.

Can you imagine depending on your co-workers to save your life? This is exactly what happened to operating room nurse Paul Griffiths.

Paul, who accepted his first job at London Health Sciences Centre (LHSC) in 1975 and even met his wife Donna there, was an RN in his 50s when he started getting sick to his stomach each morning. This came as a surprise, since Paul seemed to be in good health and kept fit in order to care for his adult son, who has cerebral palsy.

Paul visited his family physician, thinking he was dealing with an ulcer, and was referred to a specialist for endoscopy (when a tiny camera is inserted into your digestive system to diagnose problems). The specialist prescribed medication for the issues he found in Paul's esophagus and stomach, and Paul was hoping that was that - but Donna, a former coronary care nurse, felt differently.

"I didn't have chest pain or any cardiac symptoms," says Paul, "but knowing my family history, she wanted me to have my heart checked."

It was at an electrocardiogram (ECG) test several weeks later that Paul first learned something more serious was afoot. An ECG records electrical signals to look for patterns in a patient's heart's rhythm - and the cardiologist didn't like what he was seeing.

Paul was quickly booked for an angiogram, an x-ray that looks at the heart's blood vessels. The procedure was happening in a Cardiac Catheterization lab at University Hospital and one of Paul's friend and colleagues from the Hospital was the attending nurse. He woke up to find her holding his hand with tears on her cheeks.

"The cardiologist told me that my coronary arteries were 90 per cent blocked, and that I was a walking time bomb for a heart attack. A widowmaker, it's often called," says Paul. "I had to have emergency open-heart surgery - a quadruple bypass."

Paul's heart and lungs would be stopped, he'd be connected by the perfusionist to a heart-lung bypass machine (which temporarily performs the functions of the heart and lungs), and four grafts (arteries and veins) from his wrist and thigh would be used to create new pathways of blood to the heart.

He awakened in the Intensive Care Unit at 3 a.m. after the eight-hour surgery was complete. He had a new set of coronary arteries, a great deal of pain from the open-heart procedure and a caring nurse by his side. "She was like an angel," he says. "I told her she should be nurse of the year. She'll always be in my heart."

After a week-long stay in the Cardiac Surgery Inpatient Unit at University Hospital, Paul was able to return home. He was humbled by the care and support he received from his colleagues, both in the hospital and during his recovery at home.

Paul was back in the OR - as a nurse, happily, rather than a patient - after three months. Now, a year later, he's doing his regular workouts and feels as good as new. He'd like to continue working for several more years, and to make travel more of a priority.

"I'm lucky I'm alive," he says. "I really think I have a guardian angel, maybe two!"

Paul is quick to credit his amazing co-workers at University Hospital - caring friends, generous supporters and skilled caregivers who rebooted his heart.

"I can't say enough about the care I received," he says. "Everyone - from the physicians to the nurses to the perfusionist to the cleaners - was phenomenal. Dr. Kiaii saved my life."

"I really think I have a guardian angel, maybe two!"
-- Paul Griffiths