The Rediscovery of Self Through Hardship: Alison Evans' Story 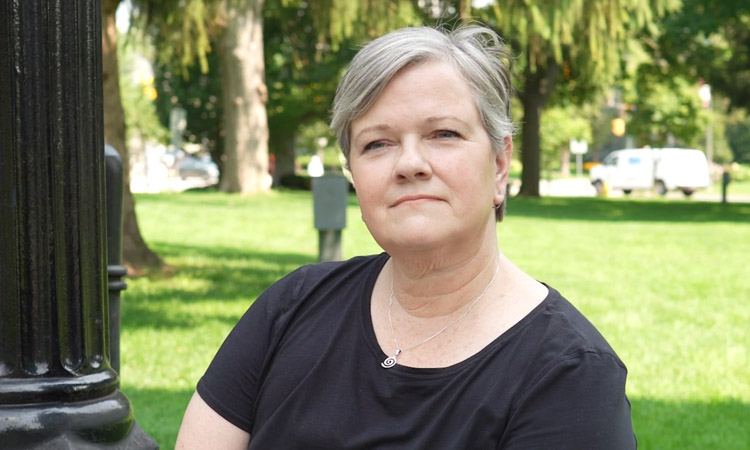 Ovarian cancer is known as the cancer that whispers. Its lack of symptoms means many women are not diagnosed until later stages, when the disease has spread and is more difficult to treat. 56-year-old Alison Evans knows this all too well.

When she was diagnosed with stage four ovarian cancer in 2012, the only noticeable symptom was a lump on her abdomen, which was initially thought to be a cyst. As a skilled and seasoned nurse working at St. Joseph’s Health Centre, she knew how to keep her cool in times of uncertainty. However, further examination revealed it to indeed be a tumour.

“I thought for sure my number was up,” says Alison. “In my head, I was planning my funeral. I was envisioning how I was going to say goodbye to my children, who were teenagers at the time. It was absolutely terrifying.”

Since her first surgery and chemotherapy nine years ago, she’s had to deal with multiple recurrences. Four, to be exact.

“I hate to use the term cancer journey because, to me, a journey is something fun,” she says with a wry laugh. She calls it her “cancer experience” instead. But despite all the ups and downs, she is grateful for the care she received at London Health Sciences Centre (LHSC). Dr. Akira Sugimoto, her main gynecologic oncologist, was steadfast and encouraging.

“He’s an amazing man, an amazing physician and just a really great person,” Alison says. “He never made decisions without making sure I was okay with them.”

From not only a patient’s perspective but a nurse’s as well, Alison attests to Victoria Hospital’s gynecological unit being second to none. Having also spent her fair share of time in LHSC’s cancer clinic, she says the people there helped relieve her of a deep, melancholic loneliness.

“The treatments are designed to heal my body, but the care I get there is what heals my soul,” she says. “I can’t imagine going through this without the kind, caring support of the amazing people there.”

Today, Alison has what they call NED – No Evidence of Disease. She’s lived to see her son become a licenced mechanic, while her daughter is currently following in her mother’s footsteps studying medicine, and who is also newly engaged.

Alison says she’s a different person because of cancer. She describes herself before her diagnosis as constantly busy, always chasing the next credential or the next group of letters to go after her name.

“What matters to me now are relationships, being creative, just enjoying health every single day and not taking any of it for granted.”

The physical toll of all the treatments has forced Alison to leave her nursing career, but the extra time has given her a chance to rediscover her love of art. She now spends much of her time painting, a dream she’s had since she was a teenager.

“I think we’ve been made to believe that a cancer diagnosis is the worst thing that can happen. The word ‘cancer’ strikes fear in people’s hearts. But I’d like people to see that my life is good,” Alison says with graceful eloquence. “I like who I am now, and if I had to go through this to get me here, I’m not sure I would change anything.”

Ovarian cancer is a devastating illness affecting thousands of Canadian women every year. With the visionary philanthropy of our donors, LHSC sits on the world stage of discovery, giving hope enough to drown out even the most insidious of whispers.