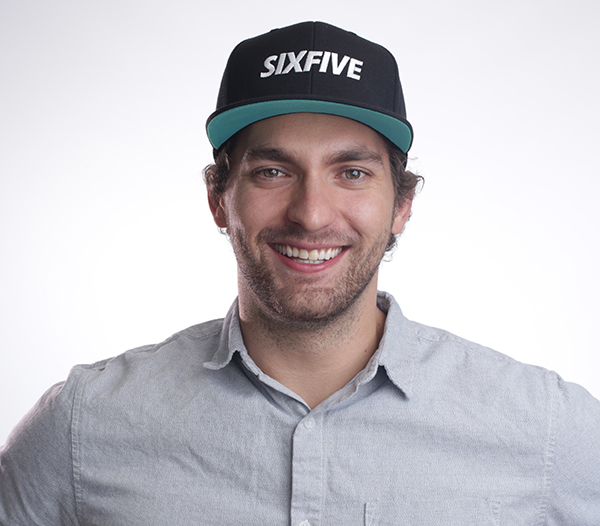 The newest member of the Mental Health Campaign Cabinet at London Health Sciences Foundation (LHSF) is a business owner, philanthropist, hockey player and grateful patient – all at only 25-years-old.

Just four years ago, Tyler was in a much darker place in his life. After a suicide attempt almost took his life, he reached out from the crushing depression that enveloped him.

“I need help,” he admitted to his family. His mother drove him to Victoria Hospital.

Years earlier, Tyler’s journey with depression began when he was a child. His home life was unstable and traumatic. One of the few activities that helped him cope was hockey.

“Even though there was a lot of strife in our family, hockey was one of those things that brought us together no matter what,” Tyler said.

He played competitively for the Elgin-Middlesex Chiefs and was drafted by the Oshawa Generals of the Ontario Hockey League.  He ended up playing for the London Nationals to be close to his family and pursue his education at Western University and Fanshawe College.

At 21, his hockey career “went out the best possible way.” The London Nationals won the coveted Sutherland Cup for the first time ever.

“It was a big moment in my life, but also very bittersweet,” Tyler said. “I remember standing on the ice after the game when everyone was cheering and celebrating and just thinking ‘What will I do now?’”

A rocky summer followed the championship. Tyler was struggling with his identity and abusing drugs. Later that summer, his father suffered a major heart attack. Though his father survived, Tyler’s stress and anxiety was mounting at an overwhelming rate.

He split time between his grandmothers and mother’s house, took a leave from school and a distrust of media, technology and social constructs evolved into a full-blown psychotic episode, with suicide seen as a potential way out of a world he no longer felt connected to.

The pain and mental anguish was so severe and all-consuming that Tyler tried to end his life. His mother drove him to the hospital and Tyler was admitted to the mental health inpatient unit at London Health Sciences Centre’s (LHSC) Victoria Hospital, where he stayed for about six weeks.

While living in the hospital wasn’t easy, once he began treatment and therapy, Tyler’s recovery began taking shape.  Through speaking with the Dr. Volker Hocke, he was able to make sense of some of his feelings and stabilize his moods though a balance of therapy and medication. Dr. Hocke also ordered an MRI after learning Tyler had suffered several concussions through hockey that could be affecting his mental health. This multi-faceted approach to his care – and being able to find validation behind some of his thoughts – gave Tyler a new sense of hope.

“I went from having suicidal thoughts every second, to once a minute, to once an hour, to having a whole day go by without any harming thoughts,” Tyler said. “Slowly, I was feeling and getting better.”

With a schedule of one-on-one and group therapy, activities such as art and mindfulness, musical therapy and exercise, Tyler began to reexperience moments of happiness.

“One of the most important things that gets instilled in you there is that you need to have a routine and it needs to be stringent if you’re going to get better,” he said.

When the six weeks were up, he left the hospital determined to keep improving. He re-enrolled at Fanshawe College in Interactive Media Design, where he learned the skills needed to offer valuable marketing services to business owners. By the end of his tenure at Fanshawe in the summer of 2016, he’d established a digital marketing business, SixFive.

“After all the darkness, there have been some beautiful moments in my life,” he said.

Tyler continues to work hard at his business while maintaining self-care through yoga, writing, hockey and counselling. After a long journey, Tyler was recently diagnosed as bipolar and acknowledges that although the battle with mental illness can last a lifetime, you can still thrive and live a happy life with the right tools and support.

He also gives back to the community extensively, which includes volunteering with LHSF as a way to help make a difference for the thousands of people in our community in need of mental health care.

“Without support, the mental health services in our community will never be able to keep up with demand and offer the help needed,” Tyler said. “We need places like LHSC to pioneer this important work because it leads by example. If I can help that in any way I can, then I absolutely will.”

"I owe the fact that I’m still here today to my time at the hospital. Even though the system is strained for resources, there is so much good in there." - Tyler Bryden