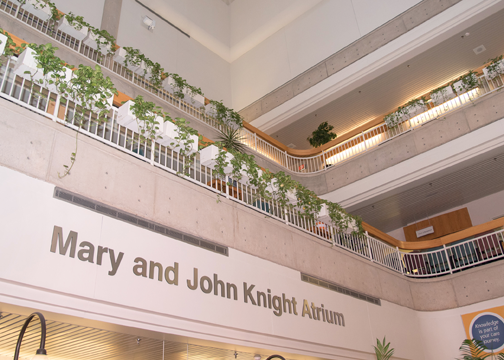 The atrium at LHSC&#039;s London Regional Cancer Program has been named in honour of Mary and John Knight, in recognition of their $5.25 million estate gift.

Funding will lead to new treatments for ovarian cancer

London, Ont. – Former Western University Economics Professor John Knight, who passed away in January 2016, invested $5.25 million in London Health Sciences Centre’s research with a gift from his estate. The donation, which was announced today, is the largest estate gift ever received by London Health Sciences Foundation.

“Planned gifts can truly leave a legacy and that is what we have witnessed today,” says LHSF President and CEO John MacFarlane. “This donation will immeasurably and positively affect the lives of so many patients and their families for years to come.”

In announcing the donation, estate executor and good friend Bob Merrifield explained that the inspiration for Mr. Knight’s donation to cancer research was his wife Mary, who passed away from ovarian cancer in 2008. The gift was announced on Valentine’s Day to symbolize their love for each other.

“Married for 34 years, Mary and John were career educators, kindred spirits and life partners in the true sense of those words,” says Merrifield.

It was a 2015 meeting with the Translational Ovarian Cancer Research team at Lawson Health Research Institute (the research institute of London Health Sciences Centre), seeing their innovative approach in understanding the disease - and their potential for quickly advancing that knowledge into improved and new treatments - which led the Australian-born professor to donate to London Health Sciences Foundation.

“This gift was a very personal and heartfelt decision by John,” says Merrifield. “He hoped that supporting this program would lead to earlier screening and produce evidence-based treatment protocols to improve the future for those women who have their life path altered in confronting ovarian cancer.”

London Health Sciences Centre President and CEO Murray Glendining says donations help support ongoing work within the hospital itself, as well as with partners in the community and beyond, to design new care models and continually advance health care through knowledge, discovery and innovation.

“This gift will expand our capacity to find innovative new approaches to ovarian cancer treatment that ultimately lead to improved patient outcomes, and for that we are truly grateful,” explains Glendining just prior to revealing that the atrium in the cancer centre has been named in honour of Mary and John Knight.

The Translational Ovarian Cancer Research Program started in 2007, co-led by Dr. Gabriel DiMattia and Dr. Trevor Shepherd. They developed one of the largest primary ovarian cancer cell repositories in the province, and unique research projects emerged from having local access to ovarian cancer tumor tissue.

The team also created a state-of-the-art experimental model to study metastasis (how cancer spreads) which has led to discoveries on how to target this cancer with new and more-effective drug therapies.

“John Knight's generous gift and his belief in our program are truly inspirational,” says Dr. DiMattia. “This funding will give our team the further resources needed to accelerate and expand our research, and translate our findings into clinical trials that directly impact patients.”

Specifically, this donation will be used to increase the number of researchers and research assistants, upgrade facilities, acquire state-of-the-art equipment and enable researchers from London to train and collaborate further with researchers around the world.

For more on LHSF’s $200 million campaign, and on the campaign’s cancer care and research priorities, please visit www.lhsf.ca/campaign/cancer-care. 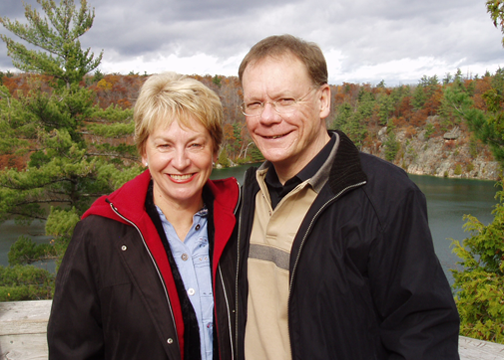