We Are Donors Too 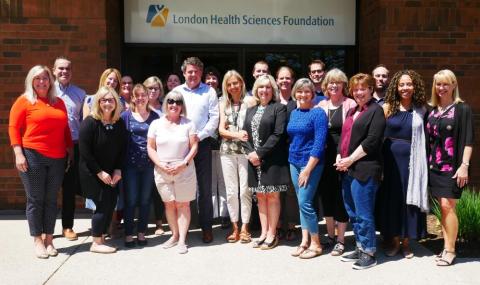 London Health Sciences Foundation (LHSF) employees have many different reasons for giving back to their hospital. Some of them have been patients themselves. Some are inspired by the generosity they see each day from other donors in the community. Some have had loved ones pass away from a disease, and want to support ground-breaking research that will help others. Each and every one of them witness how essential donor support is in advancing research and improving patient care.

“This is my 10th year as an employee donor, and I think it is so important to support my workplace,” says Karen Bethell, User Support Analyst.

“The money raised by the foundation allows the hospital to fill the gaps where funding is not available from the government. I have consistently supported highest priority needs so that my donation is put to where it is needed most."

Another long-term LHSF employee, Todd Crowe, expresses why he participates, “I've been with the foundation for 11 years, and have always given to the foundation. Donating, no matter the amount, means the difference between affording a piece of equipment and having to do without.”

This year, May was the focus month for the LHSF Employee Giving Campaign. Employees were acknowledged at the end of the month with a few treats from the Wellington Road Boston Pizza, an in-kind donation of a gift basket and gift card from Farm Boy, as well as with words of gratitude from LHSF President and CEO John MacFarlane.

“Our team here truly understands that the spirit of London Health Sciences Foundation is rooted in philanthropy,” says John. “We acknowledge that with donor funding, LHSC can acquire advanced technology and pursue novel research that leads to improved patient care."