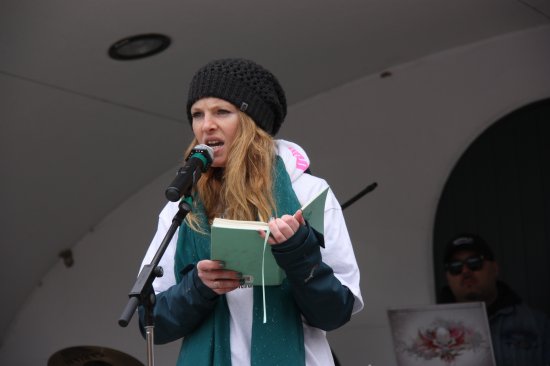 Melissa Selmes was a 31-year-old new mother when she was diagnosed with stage III ovarian cancer. Originally given just one year to live, Melissa and her medical team at London Health Sciences Centre (LHSC) have fought to get her to where she is now – cancer free.

Melissa’s story began in 2010 when she was pregnant with her daughter. As her daughter grew inside of her, so did an ovarian cyst. When the time came for Melissa to have her C-section, the cyst had grown to an 18-lb tumour. Her doctors removed the tumour, along with her right ovary. The tumour was tested, and revealed that there was nothing to be concerned about, so Melissa did not need any further treatment. She returned home to raise her baby girl.

In 2013, Melissa began to experience back pain and bloating, which she assumed were caused from her menstrual cycle. She then began to experience dramatic weight loss. Based on Melissa’s history, her family doctor sent her for an ultrasound, which revealed a mass on her left ovary. She was sent to LHSC’s Dr. Jacob McGee for surgery to remove the mass.

“When I woke up from the surgery, he said he had to do a full hysterectomy - fallopian tubes, uterus, cervix, everything. The mass had fully eaten my left ovary.”

Melissa was diagnosed with stage III mucinous adenocarcinoma of the ovary, which is a very rare form of ovarian cancer. Because of the aggressive nature of the cancer, the surgery only removed a small portion, so chemotherapy would come next. But at the time of her diagnosis, there was no chemotherapy in place that would target that type of ovarian cancer. She was given one year to live.

Fortunately, LHSC oncologist Dr. Stephen Welch was able to combine unique chemotherapy medications for Melissa based on the genetic makeup of her specific cancer. Melissa’s treatments were successful, and in early 2016, all of her scans came back showing there were no traces of cancer left. However, Melissa’s journey isn’t over.

“With the type of cancer that I have, it isn’t a matter of if my cancer will come back, but when. But because of the things they are learning at LHSC, my plan B and plan C are already in place for if and when we need it,” she says.

Melissa encourages more women to take control of their health, and describes the symptoms of ovarian cancer as “things that we as women ignore every day.” From her own experience, she recalls “the back pain that I kept chalking up to me carrying around a baby. Bloating, which I chalked up to my period. Trust your instincts ─ if you think something is wrong, it probably is.”

Melissa’s journey with cancer has changed her life in a way she never thought possible. For her, life has slowed down and she is enjoying as much as she can. One of Melissa’s passions since receiving her diagnosis is the Run for Ovarian Cancer, which is a yearly community event that supports LHSC. She actively participates in this event, and shared her inspiring story with attendees at the 2019 run.

Reflecting on her time at LHSC’s London Regional Cancer Program, she remembers how incredible her medical team was, “All they wanted to do was to make sure you were as comfortable as you could be in the most uncomfortable situation you would ever be in. These men and women who get up every day to do these jobs −  99.9 per cent of these people were there because that is what they were put on this earth to do.”

She adds that if it wasn’t for her care team “I would not be here today, and my daughter would have no real emotional attachment or memory of me. Everything I’ve been able to create in this last five years has just been amazing and something that wouldn’t have been possible if it weren’t for all these other people.”