Paying Forward the Kindness of Strangers 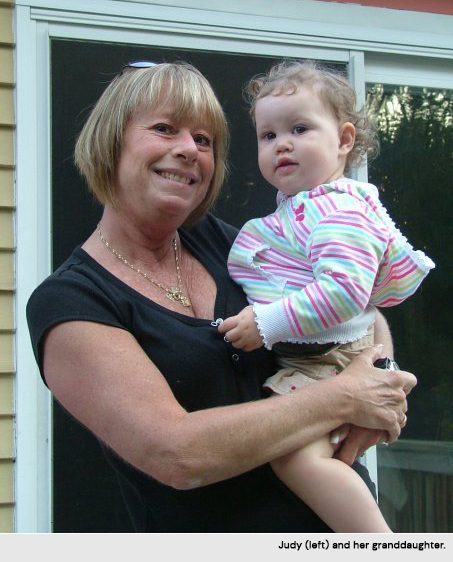 Sometimes the smallest gesture can have the greatest impact. For Carol Weekes Schacter, it was a brief moment five years ago at LHSC’s London Regional Cancer Program (LRCP).

Carol’s sister Judy was undergoing treatment for an aggressive brain tumour known as a glioblastoma and had her head shaved for brain surgery. Carol wanted to get her sister a nice wig, but knew Judy would prefer to pay for it herself; however, Judy was experiencing some financial challenges. Carol explained her sister’s situation to a volunteer at LRCP as she was perusing the wig selection. At the same time, a teenage patient was trying on wigs nearby. Carol’s heart went out to the young patient, so she slipped away to give her some privacy. As Carol was walking out of the hospital, she felt a tap on her shoulder. She turned to see the young woman who had been trying on wigs.

“She told me about the Patient Assistance Program and how it covered the cost of a nice, realistic wig for her,” Carol says. “She was paying it forward to me because she overheard and thought my sister could benefit from the program.”

Touched by this simple act of kindness, Carol followed the young woman’s advice and was able to secure funding for her sister. The Patient Assistance Program, funded entirely by donors, helps patients pay for out-of-pocket expenses that inevitably accompany a cancer diagnosis — wigs, transportation, child care, prosthetics and other treatment-related expenses.

Carol brought the application form home to her sister and, within a few short days, she was heading to Just Between Friends — a wig, mastectomy and bra boutique — with Judy and her daughter.

“Though my sister was going through one of the worst possible situations with her brain cancer, we actually had a great day shopping for wigs and sharing laughs that day,” Carol says.

It was one of the last memories Carol shared with her sister. Judy died from brain cancer just three months after her diagnosis on July 1, 2014. Though filled with grief, Carol was incredibly grateful for the care her sister received.

Carol remained connected with the hospital after her sister passed away and eventually began volunteering and fundraising for London Health Science’s Foundation’s Cancer Care Campaign. Carol’s experience with cancer goes back much further than Judy’s care. Her mother died of metastatic breast cancer and her father had lung cancer.

It’s why she and her husband give back to the cancer program through the Patient Assistance Program, which allowed her sister to enjoy some much-needed normalcy during a tumultuous time, without added financial stress. Carol also supports Access Cancer Therapies (ACT) Now – a critical fund that helps pay for new treatments and medications not covered by OHIP.

When asked what her sister would think of Carol’s commitments to cancer care, she replied: “I think she would be smiling down. We always had each other’s backs and I know if she was here, she would be giving back too.”

“It’s important to pay it forward. I often think of that young girl who told me about the Patient Assistance Program. It’s because of kind people like her, and all the donors and volunteers, that we are able to create awareness and help so many more patients going through this terrible disease.”