New Year made happier for Dreamers 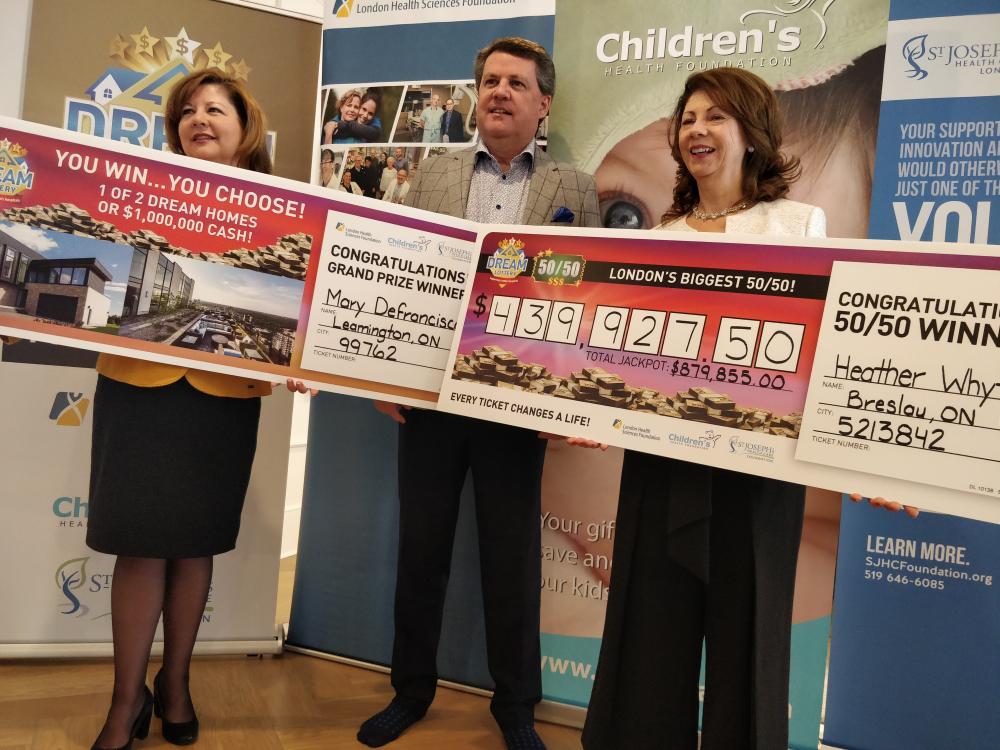 The top two winners of Dream Lottery in support of the regional hospitals in London were revealed this morning at the Millstone Dream Home in London.

It is a happy morning for hospitals in London too, with the lottery announcing it raised more than $1 million in this latest draw, lifting the total raised since 1996 to more than $34.6 million (net) for equipment, research and education at London Health Sciences Centre, Children’s Hospital at LHSC, and St. Joseph’s Health Care London.

The ticket for the lottery’s Grand Prize (ticket number 99762) was purchased by Mary Defrancisco of Leamington. The winning ticket number was revealed by London Health Sciences Foundation President & CEO John MacFarlane, who then called Defrancisco with the good news.

The lottery was initially unable to contact the grand prize winner, but she called later in the morning. Initially in disbelief, Defrancisco was worried it might be a bad joke and didn’t want to invest a lot of emotion in the win until she confirmed it. Once she realized the win is real, she says, “I can’t believe it, I’m feeling so blessed, this is news of a lifetime!”

Defrancisco has bought tickets before but never won. She debated buying this time but decided she needed to keep supporting the hospitals as her family has experienced their care first-hand.

“I feel like I’m being pranked,” Whyte says when she is told of her win. “I don’t know what to say, it’s amazing!” she responds after being assured the win was real.

Whyte says she is grateful for the healthcare system in the region and the work done at London’s regional hospitals.

All winning numbers for the lottery were drawn January 9, 2019 at the office of Deloitte LLP, 255 Queens Avenue, Suite 700, London, Ontario under the supervision of accountants of record from the firm Deloitte LLP. The primary purchaser of each winning ticket will be contacted by phone and/or mail.

The names of major prize winners are posted on-line at www.dreamitwinit.ca and a printed list of winners is also available upon request by calling 1-866-319-9818.

The winning will continue next month with the Riches and Relaxation Calendar draws. Winning names and numbers will be posted each day in February on the Dream Lottery website at www.dreamitwinit.ca and on Dream Lottery’s Facebook page at www.facebook.com/dreamitwinit.

“Thanks to Millstone Homes, Tricar, Shoppers Drug Mart and all our suppliers for helping us create another successful Dream Lottery. Most of all, thanks to Dream ticket buyers for supporting their families, friends and neighbors who rely on the outstanding care of our hospitals.” Elana Johnson, Vice Chair, Children’s Health Foundation

“Dream Lottery supporters continue to advance healthcare in our community. What’s more, their support allows the teaching and research hospitals in London to have an impact far beyond our region through medical discoveries that improve bedside care.” Michelle Campbell, President & CEO, St. Joseph’s Health Care Foundation

New Year made happier for Dreamers